In founding his workshop in the Swiss Jura in 1884, Léon Breitling chose to devote himself to an exclusive and demanding field: that of chronographs and timers. These precision instruments were intended for sports, science and industry. Thanks to its high-quality products and its constant quest for innovation, the brand accompanied the boom of competitive sports and of the automobile – as well as the first feats of the aviation pioneers. 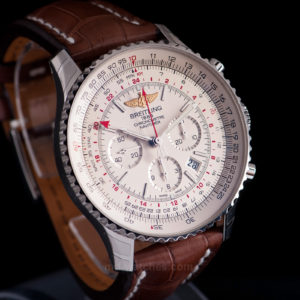 In 1915, Breitling heralded the emergence of the wrist chronograph by inventing the first independent chronograph push piece. In 1923, the firm perfected this system by separating the stop/start functions from that of resetting. This patented innovation thereby made it possible to add several successive times without returning the hands to zero – which proved extremely useful both for timing sports competitions and for calculating flight times. In 1934, Breitling set the final touch to the modern face of the chronograph by creating the second independent reset push piece – a decisive breakthrough that was soon adopted by the competition.

In 1952, Breitling launched its legendary Navitimer wrist chronograph featuring a circular slide rule serving to perform all navigation-related calculations. A cult object for pilots and aviation enthusiasts, it has been continuously manufactured for almost 60 years – making it the world’s oldest mechanical chronograph still in production. In 1962, a Navitimer accompanied Scott Carpenter on his orbital flight aboard the Aurora 7 capsule, thus becoming the first space-going wrist chronograph.

In 1969, the brand took on one of the greatest 20th century watchmaking challenges by presenting the first selfwinding chronograph movement. In 1984, Breitling heralded the rebirth of the mechanical chronograph by launching the famous Chronomat, which has since become its leading model.

In 2009, the firm’s engineers once again made their mark on the history of the chronograph by creating Breitling Caliber 01, a high-performance selfwinding movement entirely developed and produced in its own workshops. Since then, the brand has developed an entire range of Manufacture Breitling movements equipped with useful and innovative functions – such as dual timezone Caliber B04 and worldtime Caliber B05, both distinguished by their revolutionary user friendliness.

The firm is one of the world’s very few watch brands to submit all its movements (both mechanical and quartz) to the merciless tests of the Swiss Official Chronometer Testing Institute (COSC) – the highest benchmark of precision and reliability, and the only one based on an international norm. The brand built an ultra-modern facility named Breitling Chronométrie in La Chaux-de-Fonds, dedicated to the development and production of mechanical chronograph movements.

No other information about this author.